As otolaryngologists, one of our unique concerns is the treatment of ear disorders.   We are trained in the medical and surgical treatment of such problems as hearing loss or damage, ear infections, balance disorders and tinnitus.

Impaired ear function or hearing can be from conditions as minor as wax buildup or as profound as congenital hearing loss in infants.  At ENT Specialists of Abilene, we provide the full spectrum of adult and child ear healthcare. 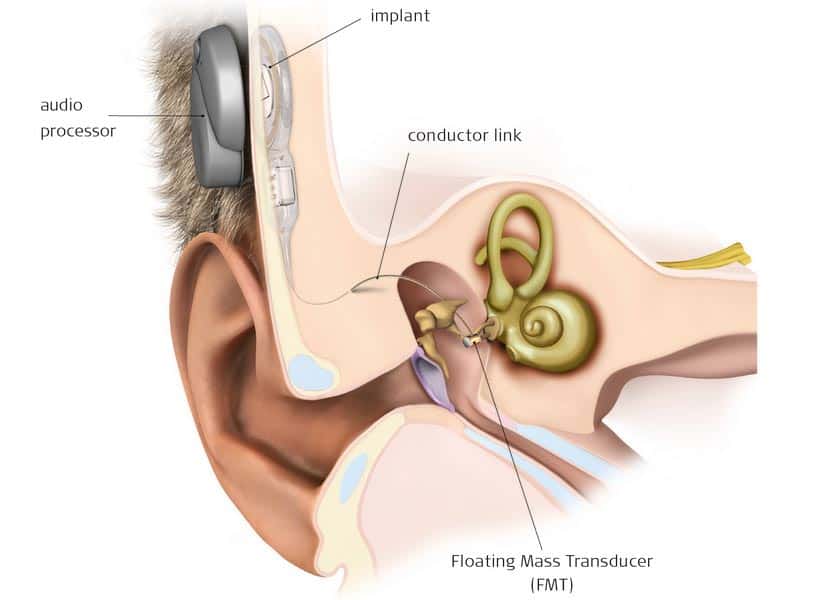 How does the BAHA System Work?

A traditional hearing aid works to push sound through the damaged part of the ear, but the BAHA System works through your natural ability to conduct sound through bone vibration. This way, sound bypasses the damaged outer or middle ear and is able to send more clear, more crisp sound directly to your inner ear. The way this will be accomplished will depend on the type of hearing loss you have, which will be determined and explained during your hearing testing and evaluation. The BAHA is different from a cochlear implant as it does not replace your hearing, but greatly improves it.  The BAHA is very technologically advanced and has features such as Bluetooth to allow it to communicate with your smart phone. Read more about the BAHA System here

The inner ear serves two purposes: hearing and balance. There are mechanisms in the ear that inform the brain about your position, orientation in space and movement and all times – to keep you in balance. A false sensation of spinning or whirling, known as vertigo, can occur when the signal to the brain is blocked or misfires. In addition to the sensation of dizziness, symptoms may include headache, nausea, sensitivity to bright light, blurred vision, ringing in the ears, ear pain, facial numbness, eye pain, motion sickness, confused thinking, fainting and clumsiness.

Dizziness can also be a symptom of a more serious medical problem, such as high or low blood pressure, heart problems, stroke, tumor, medication side effect or metabolic disorders. Therefore you should always seek medical attention if you experience ongoing or repetitive dizziness.

ACOUSTIC NEUROMA
An acoustic neuroma is a benign growth on the nerve that connects the inner ear to the brain.

BENIGN PAROXYSMAL POSITIONAL VERTICO (BPPV):
BPPV occurs when tiny calcium crystals in the ears loosen and begin moving about the wrong part of the ear. It is characterized by sudden, short bursts of dizziness that happen most often as a result of head movement. There is no known cause for BPPV. It usually resolves itself in a matter of days.

INFLAMMATION FO THE INNER EAR
Dizziness may be one symptom of an inner ear infection.

Meniere’s Disease
Meniere’s Disease is characterized by long periods of dizziness, lasting from 30 to 60 minutes or more. It is accompanied by symptoms such as ringing in the ears, hearing loss and a feeling of fullness in the ear. There is no known cause or cure for Meniere’s Disease, although medication and behavior changes can help reduce the severity of the symptoms.v

MigraineS
Some migraines (vestibular migraines) can cause a feeling of imbalance and vertigo. This may be accompanied by ringing in the ears or hearing loss. Migraine-related vertigo may occur in conjunction with or separate from the migraine headache.
If you’re experiencing any form of repetitive or chronic dizziness, please contact our office and schedule an appointment with one of our ENT Specialists.

Good intentions to keep ears clean may be risking the ability to hear. The ear is a delicate and intricate area, including the skin of the ear canal and the eardrum. Therefore, special care should be given to this part of the body. Start by discontinuing the use of cotton-tipped applicators and the habit of probing the ears.

Why does the body produce earwax?

Cerumen or earwax is healthy in normal amounts and serves as a self-cleaning agent with protective, lubricating, and antibacterial properties. The absence of earwax may result in dry, itchy ears. Most of the time the ear canals are self-cleaning; that is, there is a slow and orderly migration of earwax and skin cells from the eardrum to the ear opening. Old earwax is constantly being transported, assisted by chewing and jaw motion, from the ear canal to the ear opening where it usually dries, flakes, and falls out.

Earwax is not formed in the deep part of the ear canal near the eardrum, but in the outer one-third of the ear canal. So when a patient has wax blockage against the eardrum, it is often because he has been probing the ear with such things as cotton-tipped applicators, bobby pins, or twisted napkin corners. These objects only push the wax in deeper.

When should the ears be cleaned?

Under ideal circumstances, the ear canals should never have to be cleaned. However, that isn’t always the case. The ears should be cleaned when enough earwax accumulates to cause symptoms or to prevent a needed assessment of the ear by your doctor. This condition is call cerumen impaction, and may cause one or more of the following symptoms:

What is the recommended method of ear cleaning?

Manual removal of earwax is effective. This is most often performed by an otolaryngologist using suction, special miniature instruments, and a microscope to magnify the ear canal. Manual removal is preferred if your ear canal is narrow, the eardrum has a perforation or tube, other methods have failed, or if you have diabetes or a weakened immune system.

Do you hear a ringing, roaring, clicking or hissing sound in your ears? Do you hear this sound often or all the time? Does the sound bother you? If you answer is yes, you might have tinnitus.

Millions of people in the U.S. have tinnitus. People with severe tinnitus may have trouble hearing, working or even sleeping. Causes of tinnitus include hearing loss, exposure to loud noises or medicines you may be taking for a different problem. Tinnitus may also be a symptom of other health problems, such as allergies, high or low blood pressure, tumors and problems in the heart, blood vessels, jaw and neck.

Treatment for tinnitus depends on the cause. Treatments may include hearing aids, sound-masking devices, medicines and ways to learn how to cope with the noise.

Please read our release on COVID-19

We are now offering virtual appointments online. If you would like to avoid coming into the office and would rather do a virtual video appointment online then give us a call to schedule an appointment.